Onto the next Korean flour experiment: Q1 flour

Q1 (규원) bread flour has about the same 12% protein content as Beksul (백설). It is very white in appearance with little aroma. In Seoul, Beksul seems to be more widely available than Q1.

In my experiment comparing King Arthur and Beksul flours in an all-white boule, my blind taste testers and I found a discernable difference in flavor between the 2 flours. The flavor of the King Arthur loaf just had more “oomph.” Beksul lacked the same depth of flavor, most likely because of it’s lack of aroma and color due to lower beta carotene content.

Besides color and aroma of the flour, Q1 and Beksul have performed similarly in previous recipes: shallower flavor in crust and crumb (compared to North American flour), moister crumb, slightly softer crust. I decided to test out Q1, but try modifying the recipe to strengthen the protein content and more closely approximate North American bread flour, and mix in a tiny bit of whole wheat flour for additional color, aroma and germ. I also used a pre-ferment (poolish) and an additional mixing step (autolyse) to draw our more flavor from the Q1. The recipe I chose was a (kneaded) Poolish baguette from Reinhardt’s “The Bread Baker’s Apprentice.”

This recipe calls for bread flour and whole wheat flour with the germ sifted out (to approximate a special flour used by Maison Ganachaud in Paris). I didn’t have a sieve fine enough, so I took Reinhardt’s advice and subbed white Q1 for all but 2 tablespoons of King Arthur whole wheat flour (the recipe required about 1 lb/0.45 kilos of flour, not including the poolish). I also added 1 teaspoon of vital wheat gluten to increase the protein content of Q1, but just a smidgen.

So what other ways can we increase the flavor of lean breads made with Korean flour without adding more to a recipe? One is to use a pre-ferment, such as poolish, biga, or pâte fermentée. Another is way is to employ Autolyse, or autolysis. Basically, you mix (only) the water and flour until combined, cover, and walk away for 20 minutes or so. During this magical period, enzymes break down the starch into sugars, and the protein into gluten. This step helps maintain flavors that can get lost through kneading/oxidation, and results in easier-to-handle dough. I went ahead and mixed the flour with the water, walked away, and proceeded with mixing and a 2-step proofing cycle. This recipe requires nearly 5 hours of proofing/fermentation, but only 30 minutes of active effort (kneading and shaping). Also, the slower the fermentation, the better the flavor.

So onto shaping. Like many bakers that are new to baguettes, I have fought many battles to achieve the proper shape and ear (or grigne ) on my baguettes. Baguette shaping, at least to me, is a major league bread baking skill. The skin of the baguette can’t be too wet or too dry (affects scoring and browning). The slashes must be made at the correct angles to avoid a “Glowworm” looking loaf and get the ear to pop just so. So many variables, as my MIL likes to say when she’s exasperated.

This time, I watched the loafs through the final proofing to ensure they didn’t dry out too much. I made sure that I my lame (scoring blade) went in deep (about 0.25 inch/1 cm) and nearly parallel to the skin of the loaf. I also slashed a couple minutes before placing in the oven in order to give the openings time to expand. I experimented with a 4 slash, single, and 5 slash. Put them in a 500F Samsung home oven, introduced steam, then turned oven down to 450F after 2 minutes. Baked till the loaves reached an internal temp of 205F. Here is how they came out!

A little more girth than I expected, ok color. The single slash loaf, though not perfect, was the star, exhibiting a nice raised ear. The other loaves probably needed fewer slashes, but with a little more overlap and a deeper cut. They turned out a little glowworm-looking (bulging at the slashes instead of having perfectly straight sides). Some of my favorite bakeries in the US sell yummy, glowworm-looking baguettes (and I’ve noticed that the fake baguettes in the Korean bakery chains have bulges), but French boulanger(e)s are trained to produce loaves that are perfectly straight.

After cooling for about an hour, I sliced into one. Crust was still crisp, though could have been browner. The loaves may have dried out a wee bit too much during final proofing. The crumb structure was nice, big, and uneven (always funny to think that the words “big and uneven” are mutually desirable when it comes to lean bread). Crumb appearance was pretty, had shiny holes, with little flecks of whole wheat for nice color and aroma. Crumb texture was moister than what you usually get in France. Flavor was good. I may increase the whole wheat flour content of recipe on the next attempt and see what that does for flavor.

Conclusion: Q1 is an acceptable flour for lean breads, but special modifications (techniques and/or additional flours and ingredients) need to be made to a recipe in order to draw out more flavors and color. 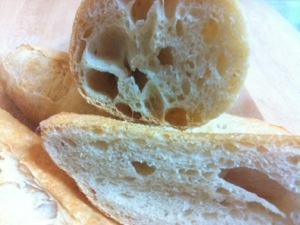